I have a quote on my website (rockoffphotography.com) which says “There are no rules for good photographs, there are only good photographs.”  Ansel Adams.  He was arguably the greatest landscape photographer for almost the whole of the 20th century.  But was he right or was he expounding on the value of sometimes breaking the rules if your visualization tells you to make the image that way.  I like to think that that was just what he was telling us.  The image below called “Great Barrington Forrest” has no leading line, and no singular point of interest,

so there are definitely rules broken, yet many people make comments on how much they like this image.  As usual it’s what the beholder enjoys.  In my next image called “Bayonne Bridge, Early Morning” you are led into the image by the foreground curve. 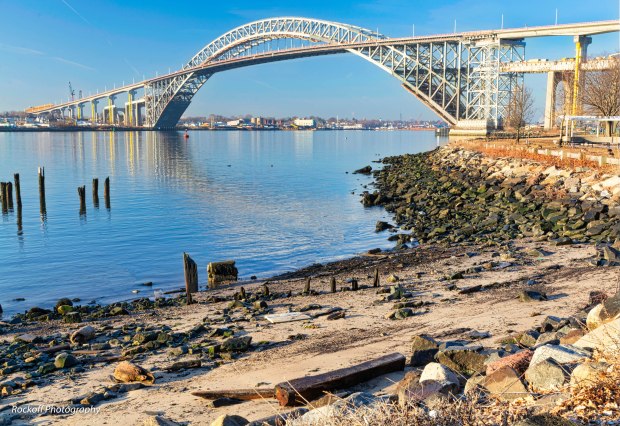 I decided when I made this image that I wanted the bridge very high in the frame to show the height and I liked the reflection of the arc of the in the water.  In my last photograph for this month’s blog called “Bushkill Falls, Pa.”

I couldn’t find too many rules that were broken so I guess this one is an example of what Ansel called ‘A Good Photograph’.  It isn’t how you photograph an image when you are out in the field it is what you saw when you came upon the scene and how you wanted your image to look.  This is how I saw Bushkill falls that day in that particular moment.  The next time I go there I might just see it differently.  I hope the weather gets warmer soon and as always remember “Keep Shooting.”